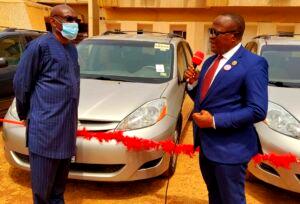 Governor Ifeanyi Ugwuanyi of Enugu State, on Wednesday, handed over four vehicles to the Enugu State Command of the National Drug Law Enforcement Agency (NDLEA) to aid its operations in furtherance of the frantic efforts of his administration to eliminate all forms of drug abuse and trafficking in the state, in partnership with the agency.

Presenting the vehicles to the State Commander of NDLEA, Anietie Idim Bassey, Gov. Ugwuanyi represented by the Secretary to the State Government (SSG), Prof. Simon Uchenna Ortuanya, said that the state government is determined more than ever before to ensure that the state in particular and the society in general get rid of all forms of drug abuse and trafficking.

The governor recounted the harms drug abuse causes young people who indulge in it, as well as the risk such illicit act poses to the future generations, stressing that the state government will remain committed to the noble course of eliminating the cankerworm in the…