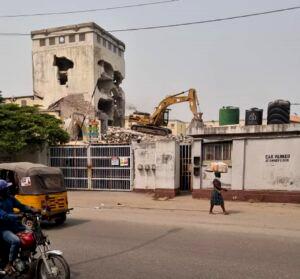 The Lagos State Rebuilding Trust Fund has begun reconstruction of the Igbosere High Court, that was burnt down during the #EndSARS protest on October 21, 2020.

Two excavators were seen demolishing the remains of the court, said to be Nigeria’s oldest and most recognisable judicial building.

During the #ENDSARS protest, hoodlums gained access into the premises, carting away computers, printers, files, fans, air conditioners and other items and later set the building ablaze before fleeing.

The chairman of the Lagos State Rebuilding Trust Fund, Yemi…