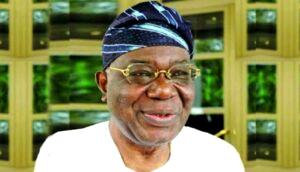 A former Chief of General Staff, Lt. Gen. Oladipo Diya (rtd) has described the former Chairman of the Interim National Government, late Chief Ernest Adegunle Shonekan as a catalyst for stability and progress.

Diya, who said this in a tribute he wrote on the demise of Shonekan, said the late elder statesman heeded the clarion call to stem the nation turbulent situation after the annulment of the June 12, 1993 Presidential election.

He wrote; “The nation was at a crossroads. The polity was heated across all fronts. The Nation needed a stabilizer and unifier.

“Then came in Chief Ernest Shonekan, The Abese of Egba land.

“He selflessly heeded the clarion call to serve as Chairman of the Interim National Government of the Federal Republic of Nigeria. He went about his duty with guile, firmness and resolve.

“As the icon was laid to rest yesterday, February 4, it is…