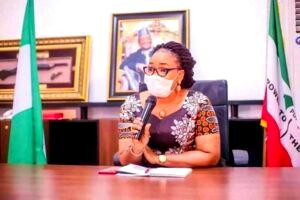 ..Urges other First Ladies to emulate her

ABUJA: The Executive Director of Engage Empower Educate Initiative, and National Council For Women Societies, NCWS, “He for She” ambassador, Mr. Kalada Belema Meshack-Hart, has commended the First Lady of Benue State, Dr. Mrs. Eunice Ortom, for encouraging female aspirants vying for elective positions ahead of the 2023 general elections in the state.

Recall Mrs Ortom had hosted the Forum of Female Aspirants on the ticket of the People’s Democratic Party, PDP, at the new banquet hall of government house, Makurdi, where she stressed the need for women to be adequately equipped to face their male counterparts as the 2023 polls draw near.

Mr. Meshack-Hart while reacting to the development, told journalists during a surprise birthday party organized for him by some women, that women seeking elective positions need to be supported…