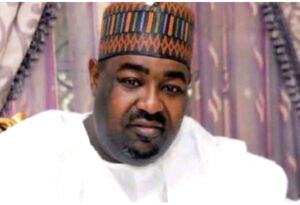 Alhaji Hassan Danbaba, grandson to late Sir Ahmadu Bello , the Sardauna of Sokoto and Premier of defunct Northern Nigeria, slumped and was pronounced dead in Kaduna.

Journalists gathered that Danbaba who was the traditional title holder of Magajin Garin Sokoto, slumped in  Kaduna Hotel and died on Saturday.

A source told journalists that the Kaduna state Government had prepared for the copse to be flown to Sokoto where he would be buried in the ancestral Hubbare, a royal compound that has a cemetery specially preserved for legendary Sheikh Othman Danfodio and his progenies.

The source said late Danbaba ,one of the Kingmakers in Sokoto Caliphate, ” was not only one of the most Influential Northerners, he was the Head of Sokoto Kingmakers.”

“He was in Kaduna to condole with another Influential Northerner, Lt .General Aliyu Gusau.(rtd) former NSA, former Minister for Defence,who, recently, lost his elder brother.”