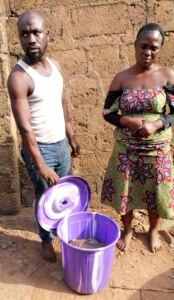 Men of Ogun State Police Command in the early hours of today arrested 43 year-old, Kehinde Oladimeji and his wife Adejumoke Raji, for been in possession of fresh human parts.

The couple, according to a statement by the command Public Relations Officer, Abimbola Oyeyemi, are residents of No.72 MKO Abiola Way, Leme,  Abeokuta.

Oyeyemi said, “the couple were arrested following a report lodged at Kemta Divisional Headquarters by Chief Moshood Ogunwolu, the Baale of Leme Community, that one Pastor  Adisa Olarewaju who is a co-tenant with the suspects informed him of offensive odours coming out from the room of the suspects”.

READ ALSO: Man arrested for allegedly killing his brother for rituals in Kwara

He added that upon the complaint, the DPO Kemta Division, CSP Adeniyi Adekunle led his detectives to the scene where search was conducted.

“On searching the room, a plastic bowl containing fresh different parts of human being was discovered in…