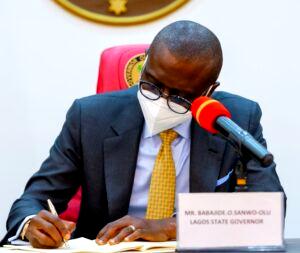 Reports have it that Olaleye announced his appointment while addressing members of staff at a town hall meeting held on Friday at the Ikorodu Campus of the institution.

NAN reports that LASPOTECH was transmuted to LASUSTECH following its accreditation by the National Universities omission on Feb. 2, 2022.

Olaleye expressed his profound gratitude to Sanwo-Olu for approving his appointment as the acting vice-chancellor of  LASPOTECH.

He also thanked the Special Adviser on Education, Tokunbo Wahab and the Speaker of the Lagos State House of Assembly, Mudashiru Obasa, for their efforts towards the successful transmutation of the institution.