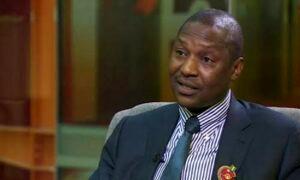 The Attorney General, Minister of Justice, Abubakar Malami is undoubtedly, the most traduced among his colleagues in the Cabinet of President Muhammadu Buhari. It has been an unrelenting volley of attacks from different foes and interests with divergent reasons but convergent motives and goals of bringing him down.

I’m not unaware of the expected backlash of reactions and character assassinations that will follow this piece but, as usual, the path has been crossed several times before and therefore not a an issue.

It began from the moment of his making the list of ministerial nominees way back in 2015 and it looked like he could be assigned the prestigious and critical portfolio of Attorney General, Minister of Justice. Multiple acts and strategies to scuttle his becoming the nation’s Chief Law Officer were hatched and played out especially by those cliques in the legal profession with the view that the office must always be occupied by one…