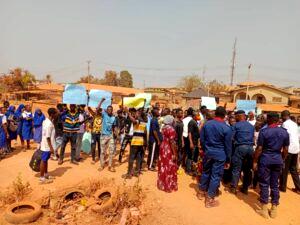 Students in Osun, under the aegis of the National Association of Osun State Students, NAOSS, protest alleged violent acts of men of the Nigeria Security and Civil Defence Corps, NSCDC in the state.

The students, led by the President, Comrade Moshood Yusuf led his colleagues to the State Command headquarters of the NSCDC over alleged shootings of their personnel in some part of the state capital, while on the envoy of the Minister of Interior, Ogbeni Rauf Aregbesola.