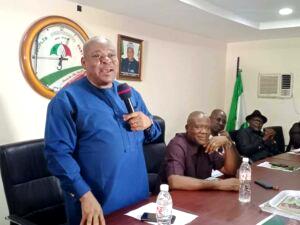 Senator Emma Nwaka who represented Abia North in the second republic has formerly joined the race for the 2023 Abia governorship seat.

He is so far the second person after Senator Enyinnaya Abaribe to publicly express interest in the PDP ticket.

Nwaka who declared his ambition Tuesday, when he consulted with the leadership of the Peoples Democratic Party, PDP, said he was in the race to help actualise the dreams of Abia founding fathers.

Senator Nwaka who stormed the party secretariat Umuahia with a large entourage of party chieftains and faithful from across the state, said he was divinely inspired to lead the Abia re-birth effort.

The former Chairman of PDP said he was in the race for a paradigm shift, vowing to do a new thing if given the opportunity to govern the state.

” I’m here to help actualise the quest of our founding fathers for a well developed state with modern amenities; I assert that I will do a new thing in Abia State”, Nwaka…