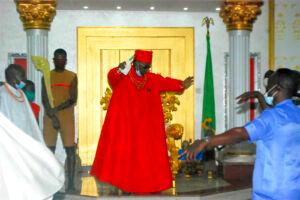 The physical handing over of two bronze artefacts from Jesus College, University of Cambridge and University of Aberdeen in the United Kingdom by the Nigerian High Commissioner to Britain to HRM  Omo N’ Edo, Oba Ewuare 11, will take place weekend in Benin.

The artefacts are ‘Okpa Cockerel’ and the bronze burst of an Oba (Uhunilo).A statement in Benin, yesterday, by the Secretary to the Benin Traditional Council, BTC, Mr Frank Erhabor, said the physical handing over of the artefacts was sequel to the directive of President Muhammadu Buhari to the Nigerian High Commissioner to personally hand them over to the Benin monarch.