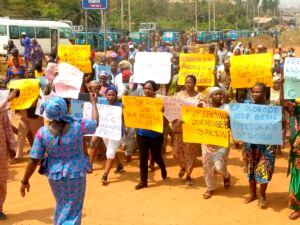 Members of the All Progressives Congress alleged to be loyal to Ogbeni Rauf Aregbesola on Wednesday protested against the alleged incessant arrest of members by police in the state.

The faction, led by the Chairman, Rasaq Salinsile protested to the state command headquarters, demanding the redeployment of the police Commissioner, Olawale Olokode.

Salinsile, on behalf of others, submitted a letter to the police which was received by the Deputy Commissioner of Police, Criminal Investigation, Valentine Ikanayo.

The protest letter read, “the Police…