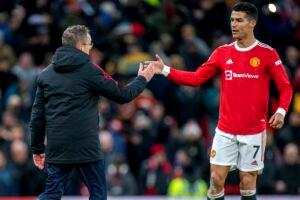 Ronaldo had gone six games without scoring, cutting a frustrated figure anytime he fails to, amidst rumors of a strained relationship with the manager.

The drought was the longest the Portugese had suffered since 2009, but his effort in the 51st sent United on their way to a much needed victory and pushed them into top four.

“That was an amazing goal,” Rangnick in repsonse to what he thought of Ronaldo’s goal.

“Not only an important one but an amazing goal.

“I think overall it was a good performance by Cristiano. Energetically, he was on there, he was always trying to help the teammates, so I think in the last weeks definitely the best…