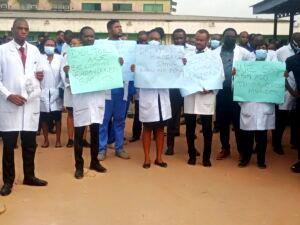 Members of the association, who staged a protest in Benin on Tuesday, expressed concern over what they termed “the high level of insecurity in the state and country”.

They blamed Osaikhuomwan’s gruesome murder in his GRA residence in Benin on insecurity. The association, therefore, urged the federal and state governments to take stringent measures to deal with the menace.

Osaikhuomwan was reportedly killed in the early hours of Monday in the presence of his pregnant wife.

The killers were said to have gone straight into his apartment and shot him in the chest before making away with some items.

The President of the group, Dr Elamah Ikpemimoghena, who broke down in tears, while making…