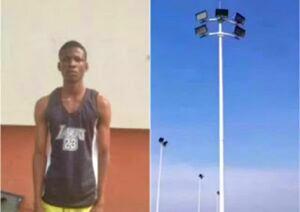 Fresh facts have emerged about the 400 level Philosophy student of the University of Calabar, UNICAL, Effiom Paul, who climbed the 60ft stadium floodlights tower to protest the dilapidated U.J Esuene stadium.

Findings by Vanguard showed that Paul who climbed the Floodlight tower on Thursday to protest the dilapidated state of the U.J Esuene stadium, was high on hard drugs, and his earlier claim of being “moved by God” was the effect of the illicit substance he took in the early hours of that fateful day.

An impeccable security source who pleaded anonymity told Vanguard that after Paul was rescued by SP Abdulhameed Awodi and his AKCS squad, he was taken to their command for profiling.

“Upon examination, it was discovered that he was not really stable, and this was contrary to reports and allegations by the Student Union President of UNICAL that he was being detained by the police, he was actually going through examination.

“After a cursory look…