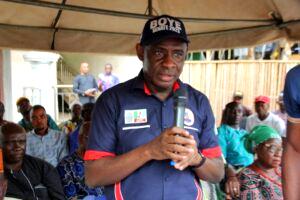 An Ondo South Senatorial aspirant, Mr. Boye Oyewumi, on Friday, assured stakeholders and members of the All Progressives Congress, APC, in Irele and Ile-Oluji/Oke-Igbo Local Government Areas of the state of his readiness to lobby relevant agencies of the Federal Government to put an end to the lingering blackout which has poised a major challenge to the economic development of the Southern Senatorial District if given the opportunity to represent the people at the Senate in 2023.

Oyewumi, who is also the Vice-Chairman and Chief Executive Officer of Ondo State Development and Investment Promotional Agency, ONDIPA, stated this when he visited party stakeholders and members in the two council areas.

He said: “My passion to usher our people into a new dispensation of economic wealth and prosperity will not be possible if our people are…