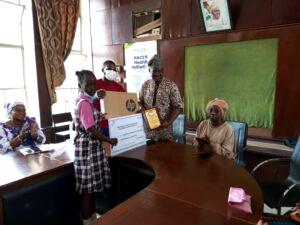 A non-governmental organization, HACEY Initiative has in its bid aimed at improving women/girls’ health and productivity, awarded some students from various secondary schools in Oyo State prizes for coming first in an essay competition hinged on the eradication of Female Genital Mutilation, FGM.

The award ceremony which was held on Friday, at the Conference Room of the state’s Ministry of Education, Science and Technology, saw five students from five secondary schools in the state awarded for their stand outperformance in the HACEY’s Essay competition.

According to the Representative of the Organization, Mr Bamidele Oyewunmi, the Essay competition was in commemoration of the international day for zero tolerance for Female Genital Mutilation. He noted that over one thousand entries were received from Oyo, Osun and Ekiti states respectively and after the entries were screened, the best five was picked and fortunately, all the five including the overall…