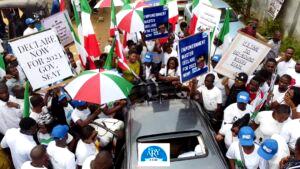 Youths from all Council Areas in Rivers who are rooting for the RIWAMA boss popularly known as ‘Empowerment Master’, have vowed to drag him to court should he fail to heed the clamour to join the governorship race.

They gave him up till the end of April to accept the call or be sued by the youths who also promised to buy the nomination form for him.

Reading from a prepared text after an awareness rally by the youths, the Coordinator of the group, Comrade Njoku Damian Ebere, said Ohuah ” has the proven integrity and capacity to succeed Wike”.

According to the speech made available to Vanguard, the former PDP boss, has variously demonstrated that he has the interest of Rivers youths at heart.

.Show commitment to your…