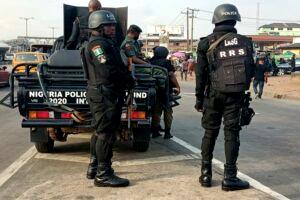 Armed military personnel and members of the Rapid Response Squad, RRS, of the Lagos State Police Command have cordoned- off Gani Fawehinmi Park in Ojota, Lagos, to maintain law and order in the area of the state.

Some youth groups had planned to stage a protest at the park on Tuesday, against the gruesome murder of Oluwabamise Ayanwola, a 22-year-old fashion designer who was killed in Bus Rapid Transit, BRT, on Lagos Island.

In an earlier flier distributed, the youths had threatened to storm the state Secretariat in Alausa, Ikeja, and all BRT terminals in the state.

They also demanded justice for the deceased, the family and the prosecution of all suspects in the death.

The groups accused the stare Governor, Babajide Sanwo-Olu and the Lagos Bus Services Limited, LBSL, management of the BRT used in perpetrating the dastardly act for their silence on the issue.