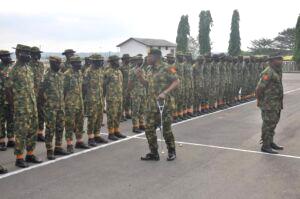 . **Task them to remain resolute on their Constitutional duties

The Chief of Army Staff, Lt. Gen Faruk Yahaya has warned troops to avoid being dragged into any form of politicking as the 2023 general elections approach

The COAS handed down the admonition at Uyo while addressing troops during his operational tour of the 2 Brigade Area of Responsibility (AOR) on Tuesday 8 March 2022.

The COAS, who was on arrival, received and briefed by the Brigade Commander Brig Gen Mohammed Inuwa, on the security situation in the general area, pointed out that “electoral activities would soon commence around the country and warned that troops must avoid being dragged into any form of politicking”.

According to a statement on Tuesday night by Brig Gen Onyema Nwachukwu, Director, Army Public Relations, “The COAS admonished troops of the Nigerian Army to remain resolute and focused in the discharge of their constitutional mandate to defend the…