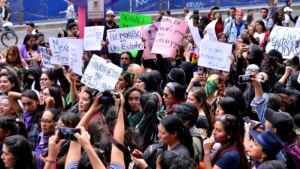 Over 40 people sustained injuries during the feminist demonstrations on the occasion of International Women’s Day in the capital of Mexico, the city’s Ministry of Citizen Security said on Wednesday.

“The Rescue Squad and Medical Emergencies provided more than 40 medical services to people that have suffered from dehydration, heatstroke, and others.

“Only eight people were transferred to hospitals, six of them police officers,’’ the ministry wrote on Twitter.

According to Secretary to the Government of Mexico City, Marti Batrez, 75,000 women participated in the march.

The groups of extremists were among the participants and engaged in vandalism during the march, a Sputnik correspondent reported, adding that they tried to break the fence of the cathedral at the end of the demonstration.

Maintenance of order during women demonstrations in Mexico City is provided by the women police units.