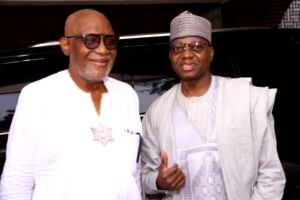 ***Unfolds his Blueprint for APC as National Chairman

AHEAD of March 26 National Convention of the All Progressives Congress, APC,  Governor Rotimi Akeredolu, SAN  of Ondo state has asked the Chairman,  Senate Services Committee, Senator Sani Musa, APC, Niger East to remain focused, continue with the consultations process and should not be distracted.

Speaking yesterday when he received Musa, a frontline APC chairmanship aspirant who paid him a courtesy visit at the Government House, Alagbaka, Ondo State, Governor Akeredolu stressed that as the APC holds its National Convention this month, the ruling party…