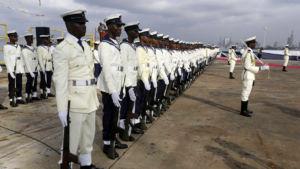 **As Naval Chief warns Commanders to be ready for consequences of conniving with criminal elements & Fraudulent practices.

Following the significant decline in piracy attacks in Nigerian waters put at 77 per cent occasioned by the Nigerian Navy’s increased counter security operations against Maritime criminality, oil theft and other attacks, the International Maritime Bureau (IMB) has exited Nigeria from its Piracy List.

This feat was made known on Tuesday night by the Chief of Naval Staff, Vice Admiral Awwal Zubairu Gambo at the closing ceremony of the 2022 CNS Retreat with PSOs, FOCs and Commanders of Formations in Abuja.

While vowing to “sustain the tempo of our Maritime Security Operations efforts”, the CNS said, “same will be extended to our neighbouring states to rid the entire Gulf of Guinea of acts of piracy and other criminal activities.

This is just as the Naval Chief warned Commanders, “that severe sanctions would be…