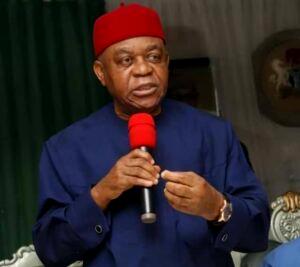 The political atmosphere in Abia State seems to be fully charged as the Ukwa-la-Ngwa Council of Elders has tackled the immediate-past Governor, and Senator representing Abia Central, Chief Theodore Orji over his recent declaration of support for power shift to Abia North come 2023.

Senator Orji had during a meeting with key stakeholders from all 17 Councils in the state at his Umuahia country home, insisted that power should rotate back to Abia North in 2023 in line with the zoning arrangement in the state.

He said that anybody scheming to truncate the prevailing zoning arrangement in the state would be embarking on a dangerous voyage.

Dissatisfied with the former Governor’s position which has, however, elicited commendations across the state, the Ukwa-la-Ngwa Council of Elders told Orji to tread with caution.

The Council in a strong-worded press statement said that their son Gov. Okezie Ikpeazu has the right to…