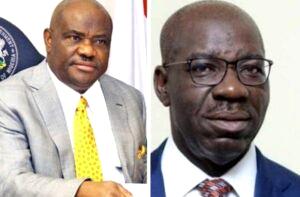 Describing him as “Serial Betrayal” Wike said ““If you check the DNA of Obaseki, what you will see in that DNA is betrayal, serial betrayal, and ungratefulness”.

You would recall that the deputy governor of Edo State, Shaibu had appeared on a Channels Television programme where he said he and Obaseki may leave the PDP if the party continues to treat them as outcasts.

Reacting, Wike described the deputy governor as an “ingrate” and called on the PDP to discipline him.

Obaseki and Wike are both governors on the platform of the Peoples Democratic Party (PDP) and have since been exchanging words following comments made by Shaibu on Channels TV.

Obaseki who reacted to Wike’s comment on his deputy called on Wike to respect party members no matter who they are, saying that the attack on his deputy is most unfortunate and…