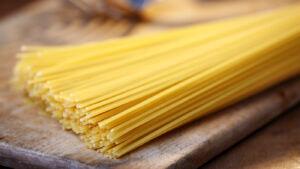 Two men, Usman Yusuf, 28, and Abdulrafiu Ashiru, 24, who allegedly broke into a shop and stole cartons of spaghetti worth N352, 000, were on Monday docked before an Ebute Meta Chief Magistrates’ Court in  Lagos State.

The defendants appeared on a three-count charge of conspiracy, stealing and conduct likely to cause breach of the peace, and they pleaded guilty to the charge.

The Chief Magistrate, Mrs A. O. Akinde, ordered their remand at the Ikoyi Correctional Centre.

Earlier, the prosecutor, Insp Orobosa Osagiede, told the court that the defendants committed the offences on March 12 at 3.00 a.m., at Iddo Plaza, Ebute Meta.

Osagiede told the court that the duo broke into the shop of the complainant, Mr Adewale Sanusi,  and stole spaghetti worth N352,000.

The court adjourned the case until April…