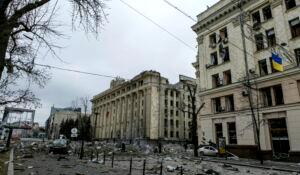 The other day, a British correspondent, Stuart Ramsay, working with SkyNews along with four of his colleagues was shot and wounded after he came under fire in Kyiv, the capital of Ukraine in the ongoing Russia-Ukraine war.

They had tried to escape from the car they were in, but Ramsay took a slug in his lower back while a cameraman named Richie Mockler had two rounds splattered on his body armour. Russian reconnaissance unit was alleged to have been responsible for the attack.

The Prime Minister of Britain, Boris Johnson, praised the crew for their bravery, saying that they were risking their lives so that “the truth is told”. In a tweet, he said: “Free press will not be intimidated or cowed by barbaric and indiscriminate acts of violence.”

Meanwhile, CNN’s Matthew Chance was on-air from Ukraine as he talked about the war and whether Ukraine’s determination was going to wane.