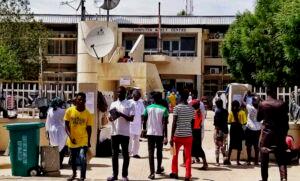 …As students take to menial jobs

The Academic Staff Union of Universities, ASUU, has extended its four-week warning strike by another eight weeks.

The decision was taken at the meeting of the union’s National Executive Council, NEC, held Sunday night at the University of Abuja main campus.

A statement signed by the National President of ASUU, Prof. Emmanuel Osodeke, released to the media yesterday, explained that the action to roll over the strike became inevitable, given that the Federal Government “failed to satisfactorily address all the issues raised in the 2020 FGN/ASUU Memorandum of Action (MoA) within the four-week roll-over strike period.”

To this end, the university lecturers’ body said it resolved that the strike be rolled over for another eight weeks to give government more time to address all the issues in concrete terms, so students could resume as soon as…