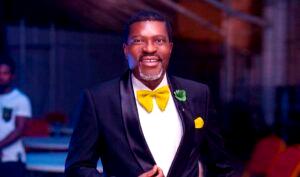 …Says, they are popular in the beds of men who sleep with them, not on the screens

At 60, I have had a robust journey as an actor, politician and lawyer’

Kanayo O. Kanayo has distinguished himself as a thorough-bred actor, politician and a lawyer. Since he made his acting debut in the pioneering 1992 movie, “Living in Bondage”, the Mbaise, Imo State-born thespian has sustained the tempo that brought him into prominence, becoming a bridge between the old and young generation of Nigerian actors.

At 60, KOK as he’s fondly called by his fans and colleagues has seen it all. He may not have hailed from a rich background, but KOK has definitely worked so hard to change his story. His 60th birthday, which was flagged off on the 1st of March, in Enugu remains a testament to how much the veteran actor has impacted positively on the society with his talent.

In this engaging encounter, the actor shares his thoughts on a number of issues including his…