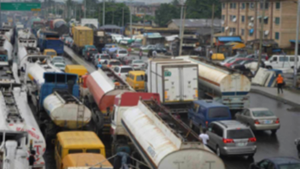 Lagos State Government has appealed to motorists for calm and understanding over the present gridlock along Apapa-Oshodi Expressway, blaming it on the current road rehabilitation.

The situation worsened on Tuesday, as tankers and few articulated vehicles parked indiscriminately along the route.

As a result of the standstill situation, impatient motorists resorted to driving against the flow of traffic, otherwise known as ‘”One-Way.”

Also, commuters alighted from the commercial buses held up in the chaotic traffic and trekked long distances to their various destinations.

Also, tankers drivers, flouted the order against indiscriminate parking on roads as they lined up on the Mile-2 Otto Wharf axis, causing congestion.

Other motorists were held in traffic for hours between Sanya to Otto Wharf along the axis.
Commercial motorcyclists,…