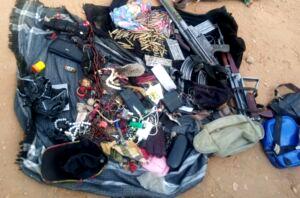 Four members of the notorious bandits terrorizing Ukum, Logo and Katsina-Ala Local Government Areas, LGAs, of Benue state also known as the Sankera axis of the state were at the early hours of Saturday killed during an exchange of gunfire with members of the joint security operation code-named Operation Zenda in Ukum LGA.

The security team also recovered during the onslaught on the gang, different calibres of firearms including a locally made pistol, AK47 and G3 rifles, five magazines, 139 live ammunition, phones and charms.

Speaking during the parade of the corpses of the bandits and the recovered arms at the Command Headquarters in Makurdi, the Commander of Operation Zenda, Chief Superintendent, CSP, Justin Gberindyer explained that the bandits were ambushed by his team while on their way to attack Gbagire village in Zaki Biam…