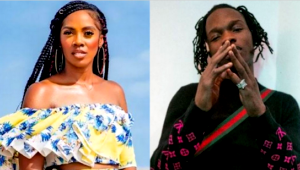 Powerhouse female singer Tiwa Savage and the Lord of the Street, Naira Marley do not appear to have much in common let alone a whimper of romance between the duo.

Quite preposterous, you would say. But Tiwa Savage and Naira Marley have actually had a sort of love banter in the past.

It started with Naira Marley on the front foot when he declared Tiwa Savage wasn’t his kind of woman, and that he didn’t even consider her sexy. He had his moment by saying his own idea of a sexy woman is Rihanna. It was a public declaration that got to the “Somebody’s Son” crooner

It would be some months later when Tiwa delivered her own sucker punch. She jokingly proposed publicly to Naira Marley. Call it bait or whatever, the Marlian nation’s King took it wholeheartedly, believing the songstress was actually tripping for him.

He accepted with his body and soul. But it was a joke. It was after the…