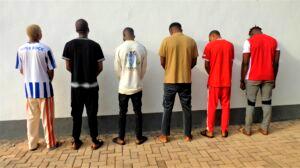 Operatives of the Economic and Financial Crimes Commission have arrested no fewer than 17 suspected internet fraudsters in Enugu and Kano states.

A statement by the EFCC Spokesman, Wilson Uwujaren, indicates that 11 suspects were nabbed in Kano while six were arrested in Enugu.

Those arrested in Enugu are: Anthony Chimezie, Ezenwaji Chinecherem, Nebo Chisom, Ndubuisi Chukwuebuka, Danyl Kosisochukwu and Ewo Williams, who were all arrested at Mankind Street, Ugwuaji,Enugu based on verified intelligence.