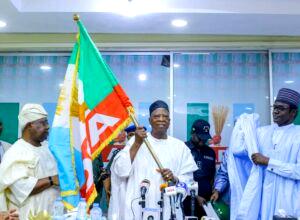 Following last Saturday’s National Convention of the ruling All Progressive Congress, APC in which all the Chairmanship aspirants stepped down for the former governor of Nassarawa State, Senator Abdullahi Adamu emerged as National Chairman, Yobe state Governor, Hon. Mai Mala Buni, has on Wednesday formally handed over the office of the APC to his successor in Abuja.

Recall that all the positions of the National Working Committee/Excos were conducted with consensus/unopposed.

Buni while congratulating the new National Working Committee, urged them to build on the gains attained.

This was contained in a press statement signed by the Governor’s Spokesman, Mohammed Mamman which was made available to our Correspondent in Damaturu, the Yobe state capital.

Buni emphasized the need for teamwork especially as Nigeria approaches another round of general election.