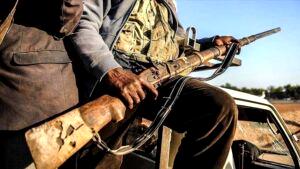 Unknown gunmen suspected to be armed bandits/terrorists have kidnapped the traditional ruler, Monarch of Bukpe Community in Kwali Area Council of the FCT.

According to sources, the suspected kidnappers invaded the community in large numbers and abducted His Royal Highness, Alhaji Hassan Shamidozhi after shooting sporadically to scare away members of the community

The incident reportedly occurred between the hours of 9 pm and 10 pm on Wednesday.

The Chief Imam of the Bukpe Community Central Mosque who is said to be a sibling to the abducted traditional ruler, Malam Jibrin was also attacked and wounded during the invasion.

Efforts by Vanguard to get the response of the FCT Police Command to the incident are yet to yield results as the spokesperson of the Command, DSP Josephine Adeh simply said, the Police are on the matter.