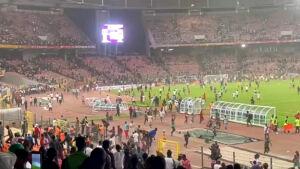 The Federal Government has set up a panel to investigate the vandalization of the Moshood Abiola National Stadium, Abuja after Tuesday’s 2022 World Cup playoff between the Super Eagles of Nigeria and the Black Stars of Ghana.

Irate fans went on rampage, destroying all within their sight after the game which ended in a 1-1 draw put paid to the nation’s aspirations to be part of the 2022 FIFA World Cup finals in Qatar later this year.

The Minister of Youth and Sports, Sunday Dare described the acts of vandalism as saddening and unacceptable.