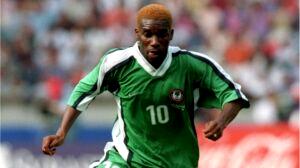 Super Eagles legend, Austin Jay-Jay Okocha will be part of proceedings when the final draw for the 2022 FIFA World Cup holds tomorrow in Doha, Qatar.

He caught the eyes of the world with his mesmerizing dribbling skills, especially during the 1998 edition with his tinted hair.

“On Friday, 1 April, FIFA World Cup™ champions Cafu (Brazil) and Lothar Matthäus (Germany) will team up with six more assistants for the final draw to reveal the groups for the 2022 edition of football’s global showpiece.