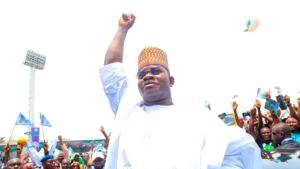 Governor Yahaya Bello of Kogi on Saturday officially declared his intention to contest for the 2023 presidential election and promised to end poverty by raising 20 million millionaires by 2030.

The News Agency of Nigeria (NAN) reports that Bello declared to run for President under the platform of the All Progressives Congress (APC).

He said that economy, security, peace and unity would be his watchword as he works to create a nation where everyone is carried along regardless of religion or tribe.

According to him, the slogan of his campaign is ‘Hope, Bridging the Gap’ because all he wants to do is bring hope to the nation while bridging the gaps in politics.

“A Yahaya Bello Presidency will have an additional target of creating at least 20 million millionaires by the same year 2030, with the aim that each of them will employ or otherwise empower at least five other citizens.

“In this regard, we are going to learn a lot from the South East.