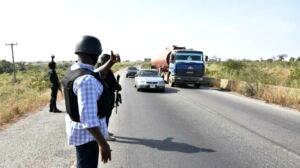 The Inspector-General of Police, Usman Alkali ,has said that the rumours that Kaduna is no longer accessible due to attacks is not true.

He spoke on Saturday when he patrolled the Abuja-Kaduna highway.

According to the police boss,  adequate arrangement has been made to secure the road against bandits.

He said troops have  been deployed to the scene of the train attack inside Dutse forest in Chikun local government area of Kaduna, where repairs of the destroyed rail tracks were on going.

“Rumours that Kaduna is no longer accessible due to attacks is not true.The Abuja-Kaduna highway is safe for people to travel by,” he said.