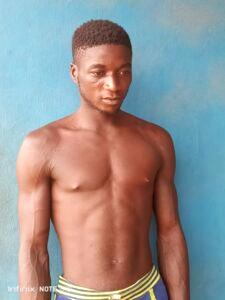 A-27-years old man Ibrahim Sikiru was on the 30th of March 2022 arrested, by operatives of Ogun State Police command for killing his biological father.

A statement issued by the command spokesperson, Abimbola Oyeyemi, said, the suspect was arrested following a complaint lodged at Onipanu divisional headquarters by one Abiodun Sunday, a neighbor to the deceased.

Oyeyemi said, Sunday, reported that the deceased, Mumuni Ibrahim, a security man came home and met his son, who was still sleeping, and when he questioned him for the reason why he was still sleeping at that time of the day, the suspect got annoyed and brought out cutlass with which he matceted the victim in five different places.

READ ALSO: How I escaped death after being abducted by Soldiers — Benue tax official

Upon the report, the DPO Onipanu division, CSP Bamidele Job quickly mobilized his men and moved to the scene where the suspect was arrested and victim rushed to General…