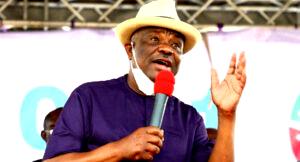 The Rivers State Governor, Chief Nyesom Wike, has stated that unemployment and hunger were part of the myriad of challenges confronting the nation.

Wike also said the security architecture in his state is impeccable and in place, adding that the state is safe for investors.

The Governor made this assertion while performing the Ground Breaking Ceremony of Garden City Ultra-Modern Building Material Market, at Mbodo Aluu on Friday 1st April 2022.

Wike, who was represented by his Deputy, Dr.(Mrs) Ipalibo Banigo, said that the project would put smiles on the faces of our people not only in Aluu and Ikwerre Local Government Area, but the entire Rivers State and Nigeria in general.

He said road infrastructure was very important noted that before 2015, Prof. Tam David West Boulevard was abandoned and people were suffering but on his assumption of office, he ensured that the road was reconstructed and commissioned.

Electoral Act Amendment: Bill yet to be signed —  Presidency sources