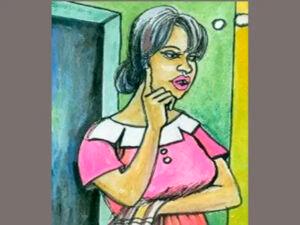 Many years ago, I had a conversation with a school mate, let me call her Tayo, who told me that she was one of six children her mother had with five husbands. I was shocked to hear this. We are brought up to believe that this is normal for men, who are entitled to a polygamous lifestyle.

A woman with five husbands was something people would seriously frown at and such a woman would be labelled with every unsavoury name in the dictionary.Tayo summarised the circumstances under which her mother ended up with five husbands during the course of her life.

I do not recall all the details I was given, it was years ago, so please allow me to fill in the blanks with some literary license plucked from my imagination.

Mama Tayo married Husband 1 when she was seventeen. The family was poor and Husband 1 was a young school teacher in his twenties. He was single and seduced the naïve young girl and she became pregnant. He married her and she had two children…