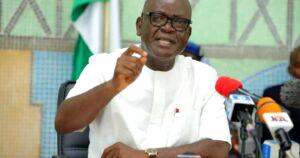 Governor Samuel Ortom of Benue state has debunked any rift in the ranks of the Peoples Democratic Party, PDP, family in Benue state over the ongoing consultations aimed at picking consensus candidates ahead of the coming party primaries and general elections.

The Governor in a statement by his Chief Press Secretary, Nathaniel Ikyur issued Tuesday in Makurdi stated that his attention was drawn to some online reports alleging a split in the party over the ongoing consultations.

He noted that, “ordinarily, we will not give attention to such unfounded gossip or accord its response with an official seal but for the sake of the less knowledgeable about the political dynamics of Benue state.

“For the avoidance of doubt, all stakeholders in the PDP family led by Governor Ortom have been meeting and consulting on all elective positions and the best way possible to produce candidates for the 2023 elections. This is to avoid rancour and…