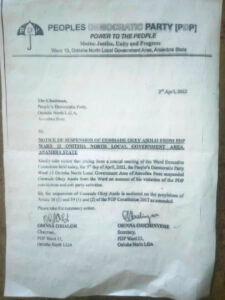 THE  Peoples Democratic Party, PDP, on Tuesday, denied that it had sacked the Acting Chairman of the party in Anambra State, Okey Asolo, who is from Ward 13 in Onitsha North Local Government Area.

He said that some faceless people have been circulating a forged letter dated April 3, purported to have sacked the party State Acting Chairman, Asolo, from the Ward and Local Government on account of his alleged violation of the PDP constitution and…