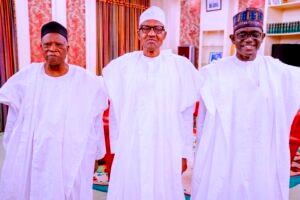 This was the first official visit the new APC helmsman was paying to the President after he was adopted as the consensus candidate at the National Convention of the party at Eagle Square, Abuja on March 26.

Senator Adamu, who represents Nasarawa West in the country’s upper legislative chamber, was accompanied by the former Acting Chairman of the APC Caretaker Committee and Governor of Yobe State Mai Mala Buni.

Recall that Senator Adamu’s emergence as the consensus candidate of the APC as a result of President Buhari’s intervention.