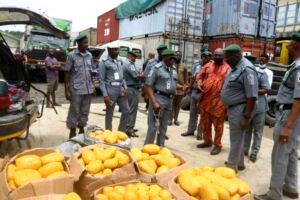 The Federal Operations Unit, Zone A of the Nigeria Customs Service, NCS said that it has impounded smuggled goods with Duty Paid Value, DPV, amounting to N767 million last month.

The Unit also disclosed that 23 persons were arrested at various points in connection with smuggling activities during the period under review.

Acting Controller of the Unit, Hussein Kehinde Ejibunu who disclosed this during a press briefing where he displayed the seizures and suspects to newsmen, said the Unit collected N89.3 million as revenue within the period.

The Controller said operatives of the Unit will always be unrelenting in our 24-hour patrols to intercept any means of conveyance of smuggled items, seized them and arrests suspects involved in the act.