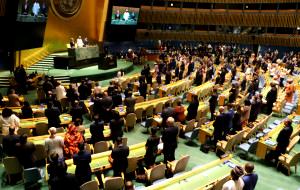 The UN General Assembly has voted to suspend Russia from the Human Rights Council in response to Russian forces’ alleged killings of civilians in Ukraine.

The resolution received a two-thirds majority in the 193-member Assembly, with 93 nations voting in favour and 24 against. Fifty-eight abstained from the process.

The UN correspondent of the News Agency of Nigeria (NAN) reports that Nigeria is among the 58 countries that abstained from voting.

Thursday’s historical vote on the floor of the UN makes Russia the first permanent member of the UN Security Council to have its membership revoked from any UN body.

The meeting marked the resumption of a special emergency session on the war in Ukraine and followed reports of violations committed by Russian forces.

This past weekend, disturbing photos emerged from the city of Bucha, a suburb of the capital, Kyiv.