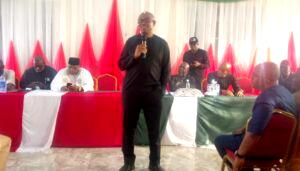 Obi, a former governor of Anambra, urged them to be guided by their conscience and vote in the interest of the country’s future and that of their children.

He spoke on Monday in Awka, when he met with prospective delegates from Anambra.
According to him, monetary consideration should not be the major factor in chosing the party’s presidential candidate.

He said he decided to end his national consultation in Anambra, after going round the 36 chapters of PDP, plus Abuja, to demonstrate his commitment to the cause.

Obi said that his experience from the tour had strengthened his resolve to seek an opportunity to steer the ship of the country.

He likened the ship to the “titanic, which was sinking while those on top were making merry”.

“For the sake of your children and future of Nigeria vote…