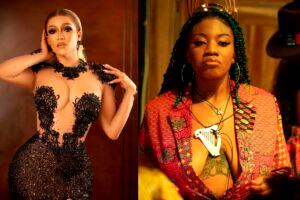 The second episode of the Big Brother Naija (BBNaija) Shine Ya Eyes Reunion show has unleashed the drama Nigerians and fans of the reality show are anticipating – starting off with a moment of truth between ex-housemates, Angel Smith and Maria Benjamin.

In the course of the show, the host, Ebuka Obi-Uchendu stirred the hornet’s nest when he asked Nini, Maria and Peace to speak on the derogatory remark they had about Angel at the BBNaija’s Executive Lounge.

Recall the trio slut-shamed Angel for her nonchalant attitude during their time in the house.

While Nini and Peace took the position to apologise to Angel, Maria on the other side remained adamant and attempted to parry the issue which escalated the tension on the live show.

Angel got provoked and confronted Maria with harsh and insulting comments which she also rebuffed.

Meanwhile, there are also newer twists to the aforesaid drama that trailed the controversial lounge conversation as shown on this episode of…