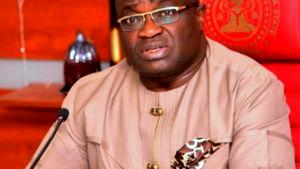 . Says conspiracy against president of Igbo extraction made him switch support for Wike

Governor Okezie Ikpeazu of Abia State, has opened up on the September 17, 2017 military invasion of Afaraukwu Ibeku country home of the Leader of the Indigenous People of Biafra, IPOB, Mazi Nnamdi Kanu, denying any pre-information of the infamous raid.

He rather explained that the Army Commander at that time, came to his office to inform him that he had orders to arrest Nnamdi Kanu .

“I was not told that anything like that (invasion) was going to happen. I only saw the GOC who was at Enugu that time, he showed up in my office and told me that he will arrest Nnamdi Kanu.

” I asked him why? He said he had orders to arrest him. I told him to give me few hours and he obliged. I called the traditional rulers and asked them to talk to Nnamdi’s father who was a traditional ruler to persuade Nnamdi to come and have a word with the GOC, but Nnamdi Kanu…